What Christmas mini-light should I buy? 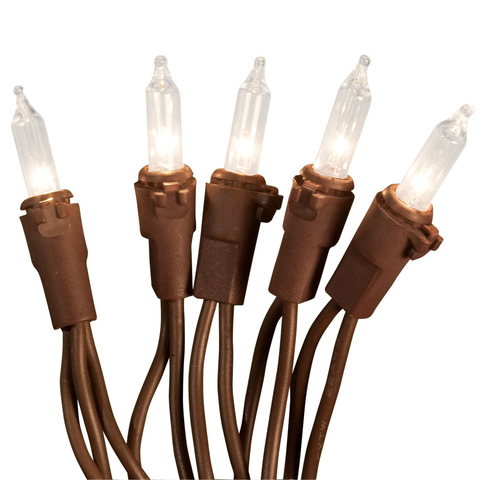 One might think that with LED, (light emitting diode) the correct light strand for your lighting needs is now complicated. The truth is that there have been issues with what  mini-lights to buy going as far back as I know and that started in 1988 when I got into the Holiday Lighting and display business in Columbus, Ohio.

I am going to touch on a few of the issues from the start that still holds true and then discuss LED strands.

In 1988 UL was not as involved in monitoring the mini-lights coming into the US and there were wide variances in quality. In simple terms, the brightness by company varied, the color coating for some mini-lights didn’t stay on the lamps. The spacing between the bulbs varied and my company used 8 inch spacing which was a better use for doing lighting in the tree canopies and hedge lines. As the cost of copper and petroleum became more and more expensive the spacing became 6, 5.5 and 4 inch spacing. How much tight the wiring was spun had an effect on the amount of wiring used to make that strand (still does) and some manufacturers would have a very loose spin on the wires. Fused and non-fused strands existed. You have the original chasing style of mini-lights in 150 strands with a cheap controller. These were never meant to be used outside and they were not reliable. For one thing this was not a 150 strand but 3 fifty light strands using the same power and an alternating control devise to make them appear to chase. The mini-light also can in both a 50 light set and a 100 light set and the incandescent still does if you can find them. In reality, you have 2 fifty light sets using the same power source. That is why ½ of them would go out and the other ½ stayed lit. We never used the 100 light set for service issues. It was a whole lot easier taking down a 25 foot section and put the replacement up in a similar fashion that to remove a 50 foot section and have it match out on with the strand you just took down to be replaced.

UL eventually started to put restrictions on the  mini-light standards and they have become more of a commodity item.

When LED lights first started being used most of you remember the white LED strand looked more like a North Carolina blue. The colors of red, orange and yellow were the first diode colors. The rest of the other colors took a little longer to master. There is over 200 variances on what is called a warm white LED bulb. What is called “cool white” was the light strand that initially had the light blue tint. The quality cool white bulbs today are much better and are a true “white—white”. Both colors now have variances off of their colors. There is a “sun-warm white’ and a “winter white” which gives you another option from the cool white.

The two main styles of mini-lights are a M-5 which looks like the old mini-lights but has dimples on the bulb. (faceted) The other 5MM looks like someone cut off the end of the tip of the bulb. So which do I use. Application can play a part in your decision. The 5M throws light out more direction and uses the facets on bulb to disperse the light. The 5MM is actually concaved at the tip end and it throws light out in a 360 degrees x 180 degrees and give you a better spread and brighter look. I would use the 5MM in most application.

All good LED light strands have a built-in rectifier which keeps the strand from having a flickering appearance. The one aspect you should look for in buying a strand of LEDmini-light is the socket. Is that socket sealed closed so water cannot get inside? (Look at the back side where the wiring goes into the socket.) This is very important. Diodes and water don’t go together well.

How long will these lights last? The answer sometimes depends on which person you are talking to or the marketing department. Here is what I know. The component of the LED strand are pretty much the same as the standard incandescent mini-lights. You have a power plug with a fuse, the wiring is the same, very little difference on the socket except the LED socket should be sealed off and the female plug is the same. If you put them up, take them down after the season and store them out of the sun and dirt they should last many seasons. AND they should use about 1/7 the energy cost of the incandescent strand. You will see on packaging that you can connect an ungodly number of strands together without stopping. Don’t believe that. Voltage drop occurs with or without resistance and the most resistance (in this case the number of lights pulling from the wire) gradually reduces the amount of voltage the farther you move away from the power source. These are not heavy wire on these strands and they will lose voltage on longer runs. Don’t run 40 strands on a single run. Even though you are not pulling that much wattage on an LED bulb, that bulb is made to run efficiently at a voltage of 110-120. Long runs reduce the brightness toward the end and will reduce the life of the strands.

In September 1988, I started Nida Lighting as a full-service Holiday Lighting company. Our main clientele were homeowners in the Columbus, Ohio area. I had bought a franchise from a California based company and I can tell you that hanging lighting in the Midwest and Southern California is not the same. Nor would I find out, at my expense, you cannot decorate homes starting at $139.00 per installation.

We’re happy to answer any questions or help you with returns. Feel free to fill out the form below with your questions

pay with the world’s most popular and secure payment methods

With sites in 5 languages, we ship to over 100 countries and regions

Round -the-clock assistance for a smooth shopping experience

All prices are in USD.